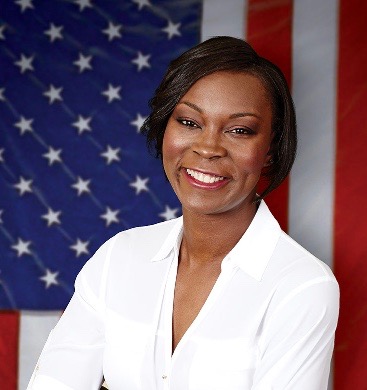 Danielle Green-Byrd was born and raised on Chicago's South Side. She earned a basketball scholarship to the University of Notre Dame where she graduated in 1999 with a degree in psychology. After graduation, she spent two years as a teacher at the Chicago International Charter School. Danielle left her teaching job to follow the call of a childhood dream--to serve her country in the Army.

In 2002, at the age of 25, Danielle enlisted into the United States Army as an E4.  Her military occupation was a military police officer. Her unit deployed to Iraq in January of 2004. On May 25, 2004, Danielle was pulling security on a rooftop when a couple of rockets whizzed past her. Immediately, Danielle reached down to grab her weapon when a rocket-propelled grenade hit her as she began to return fire.

Danielle's comrades came to her aid, carrying her to safety. When she awoke in the hospital, her entire chain of command was waiting by her bed. Danielle's master sergeant gently told her that her dominate left arm was gone and the Brigade Commander pinned on the Purple Heart. After carrying Danielle to safety, two of her leaders had returned to the rooftop against the company commanders orders to find her hand under seven inches of sand. Now standing at her bedside, her master sergeant slipped her recovered wedding rings onto her remaining hand.

Danielle returned to the States to begin her recovery at Walter Reed. It wasn't easy at first; she was plagued by questions and self-doubt. "You often ask yourself, 'Why me? I was good soldier and a good person.' I just didn't understand what it all meant, and how my future would be. There are so many questions--how will people look at me? Will I be considered crippled? So often I would ask myself, 'Why am I even here?'" Danielle explained.

Slowly, Danielle began to regain hope. Organizations came along like the Disabled Sports, Salute American Heroes and the Achilles Track Club, and gave her hope.  Four months after the injury, Danielle was running a five-mile race in Central Park in New York.  Sports continue to play an integral role in Danielle life.  Since the injury, she has learned how to play racquetball, golf, fish, and ski with the hopes of expecting her horizons.

Danielle graduated May 17, 2008 with a master's degree in School/Community Counseling from Saint Xavier University.  She also earned a master's degree in Educational Leadership from DePaul University in 2009.  She worked for the Chicago Board of Education in the Department of Sports Administration as a City Wide Sports Coordinator for four years before accepting an Assistant Athletic Director position at Malcolm X College.

In May of 2010, Danielle accepted a position as a Readjustment Counselor with the Orland Park Vet Center in Orland Park, IL.  She provides a wide range of psycho social services offered to combat zone veterans and their families in an effort to make a successful transition from military to civilian life.  In addition, she provides individual and group counseling services.